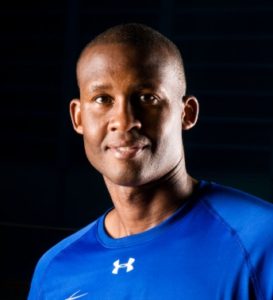 Growing up in South Miami, I never dreamed I would go on to play professional basketball.  In middle school I was an awkward, skinny boy who swore baseball was the sport I was destined to play.  When I was asked to play in a recreational game because I was so tall, I gave it a try and STUNK IT UP!!  However, something clicked in me and I knew I wanted to master the sport.

My middle school coach pushed me to practice with the high school team to challenge myself.  I was terrified the first time I showed up and everyone on the team laughed at me.  But I stuck with it and it made me a quicker and confident player because I was trying to keep up with the high schoolers!

Not only did I practice with the high school team as much as I could, I practiced my skills at home EVERY day.  I didn’t have a basketball hoop or a gym membership but I wasn’t going to let that stop me.  I cut the bottom out of a milk crate and nailed it to a tree – that was my hoop!

I did dribbling drills, practiced defensive and offensive moves outside my house and at the local park.  Pretty soon I was known as one of the best players in the country.

And while I did play on my High School team and several traveling teams, it was all the hours of practice and skill work I did on my own and with friends that got me where I am today.

PRACTICE is what allowed me to master my sport and achieve my dreams.  Want proof? Check out my stats below and see what 5 times more practice than play time can get you.

Back to Meet Our Coaches